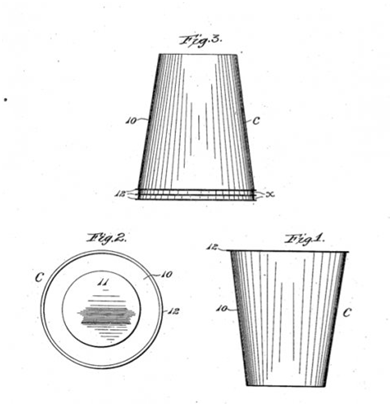 Imagine a world where we had to share our cup with others in public, like, at office, theatre. This was exactly the thought of a man named Lawrence Luellen, a boston lawyer and inventor. In the beginning of 20th century, people drinking water from a fountain, barrel, or well, passed around a cup of metal, wood, or ceramic. Luellen, one among them, was bothered about the health hazards resulting from the usage of common cup by everyone.

In 1907, he invented a paper cup and Patented it (US 1032557 A) in 1908. He named it as “HEALTH KUP”, which resembled more like a paper bag that could be used and thrown away after usage, but he later changed the name to “DIXIE CUP” after five years. In 1918, when the Spanish flu swept in, many people were killed and everyone feared of germs, this was the time when the disposable cups were in use.

It was in 1930s that saw an era of new handled cups for hot beverages. Few of them who have filed patents are, Sydney R. Koons from Ohio who filed a patent application for a handle to attach to paper cups in 1933. Another was Walter W. Cecil in 1936 who invented a paper cup with handles that resembled mugs. Soon the disposable cups were popularly in use around the world, and eventually there were many inventors inventing lids specifically for the disposable coffee cups.

Later William F. Dart and along with his son William A. Dart, had developed expanded polystyrene foam cups in 1957. They even assembled a machine that manufactured these cups. Toward the end of the decade, around 1967, Philadelphian Alan Frank filed a patent for a tearable coffee lid and based on Frank’s tearable lid, a pull-back tab was invented in 1975.

In 1980s, special type of coffee cups had been designed which were dome-shaped to maintain the signature topping of foam on the coffee. Hence suitable enough for the modern day Espresso machine produced coffee. These dome-shaped lids had headroom for the foam. Respectively, inventors responded accordingly and the U.S. Patent and Trademark Office had received nine patents for coffee-cup lids. 1984 saw the firm Solo filing patent for the invention of Traveller Lid which was sleek, dome-shaped with protruded rim and also depression for accommodating the nose while sipping. In 2005, Museum of Modern Art added this Traveller Lid to its permanent collection.

In 1990s, as safety had become predominant, as a result the use of paper cups had come into use once again. Howard Schultz, owner of Starbucks, chose to go for the paper cups over foam cups. In 1991, Jay Sorenson from Portland, invented Java Jacket, a cardboard sleeve around the cup that improved the insulation. Another inventor from Florida named Tim Sprunger invented a coffee lid which has an extra compartment for the nose to enhance the smell and taste of the coffee at once.

Coffee cups have, actually, evolved for a specific function and over the years they have become a combination of both function and look wise.

previous
INVENTION OF ESPRESSO- From Steam machine to motor pump
next
Will the Modi Government succeed in its attempt to establish the much needed Commercial Courts?
+91 94416 93923
+91 96668 91976
contact@prometheusip.com
www.prometheusip.com