Well, this is a techno legal way of describing our very own favorite Kajal filled in a pencil!

As mentioned in our preceding article the most important part of a patent specification is the “Claims”. The exclusive right granted to the patent can only be defined by the patent claims. The patent claims consume the maximum chunk of the time frame allocated for a complete specification. The presentation of claims should leave no room for confusion with reference to the prior art.

A claim respects attention to details. Most of the time the advantages of an invention are confused with that of claims which is not the case. A claim should strictly deal with the part of the invention for which the protection is sought.

Under the “doctrine of equivalents” a claim may convey more than what is seen at the face of it. The claims do not literally convey what is written. There lies a deeper, legally inclined meaning for the same.

A claim has three parts; an introductory phase; a body and a transition phase.

The language used in a claim will determine how broad or narrow the claims are. The claims need to comply with the principle of unity of invention and should not be framed for more than one invention in a single document.

In a pharmaceutical compound instead of system claims there could be a claim describing the chemical moiety.

Normally it is recommended to have three independent claims or less. The rest of the permissible limit could be the dependent claims.  The number of claims permitted is in accordance with the jurisdiction of the patent office where the patent application is intended to be filed.

The patent offices within various jurisdictions have their set of laws. For example; in Indian patent office no additional filing fee is charged up to ten claims. Similarly, USPTO does not additionally charge up to 20 claims.

An example comprising of the independent, dependent and multiple dependent claims;

Invention: Cosmetic pencil [US20040175223] [Kindly refer to the images in the document for greater clarity]

What is claimed is:

a shaft having an outer surface and a non-cylindrical channel extending longitudinally there through; and

3. A cosmetic pencil as recited in claim 2, wherein said inwardly tapering cosmetic core tip terminates at an edge configured for making line markings on a surface such that the thickness of the marked line can be varied depending upon the orientation of the core tip relative to the marking direction. [Further dependent on claim 2 hence multiple dependent]

A further clarity may be obtained with reference to the figure below; it is advisable to refer the claims and the figure together for better comprehension; 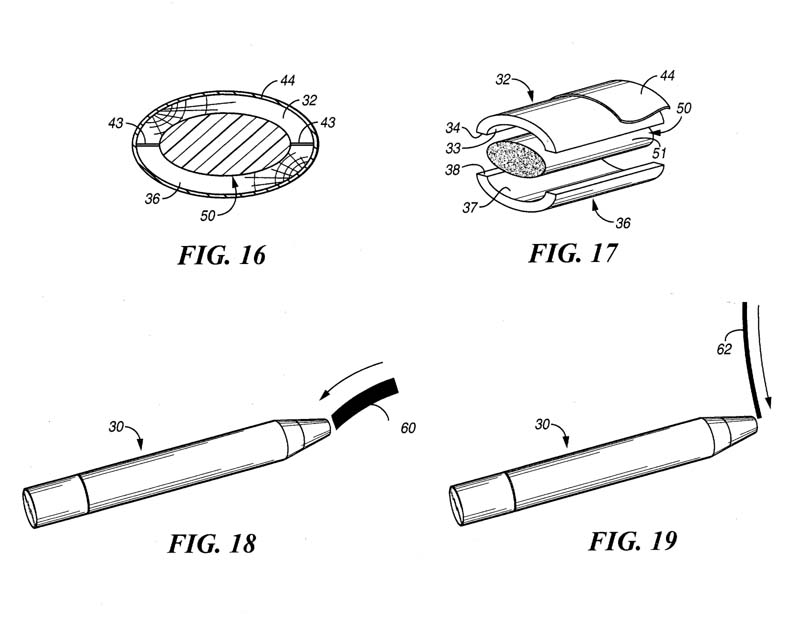 Claim construction is a premier step for securing an invention. They should be constructed with clarity and responsibility to minimize or avoid objections in the examination stage. Other classifications of claims will be dealt in our following blog.