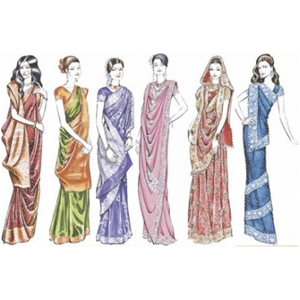 The manhandling of a long piece of cloth draped over a royal lady lead to war in the age old epic Mahabharata. A long fabric made up of cotton, silk, crepe, nylon, chiffon and a whole lot of others; available in various colours when draped artistically in a set pattern is a saree.

The word saree (originated from Sanskrit word sati or sattika meaning a long piece of cloth) is pronounced in many ways all across South Asia where it is primarily used as attire. The length is usually six yards but in some parts of southern India nine yard sarees are also worn.

The history of sari dates back to the Indus valley civilisation (approximately 2500 BC and later), where a staue of a lady priest was depicted draped in a saree. Earlier, the manner of draping a saree was greatly influenced by the class and occupation of the people from various regions. The sarees were also worn by men in the form of a lungi along with an Uttariyo (a piece of cloth worn on one side of the shoulder). During the earlier times the saree was draped without any upper garment or the blouse. The use of stitched garments was considered inauspicious especially by the Hindus. The use of a blouse started mainly with the advent of the Mughals and the Britishers.

The advent of the Britishers made the usage of the blouse almost compulsory all along the places ruled by them. They also did not approve of the use of saree without an inner skirt. Thus the saree became a three piece garment.

Over a period of time the sarees have evolved into new styles and shapes. The fishtail style wherein the saree would be draped in between the legs mostly seen for ceremonial purposes now a days, the Ghaghara which was created by stitching both the ends of a saree and giving it a frilled gown like appearance, the lungi style which would be sans frills with an upper garment etc.

Saree has been the alter ego of South Asian women more so the Indian women. With the advent of modernism, the contemporary women have moved towards western attire but, for the best of the occasions the saree still remains the primary choice. Our female national leaders have symbolised the culture by presenting themselves in traditional saree on the world platform.

Sari has certainly come of age. The ones in India are woven across the nation. Saree weaving is attached with the pride and glory of that particular region where it is woven. The quality, finesse of art and embroidery attaches a status symbol to the saree. The Kanjivarams of the south, the Baluchuri of the east, the Chanderi of central India, the Banarasis and Phulakris of the north to the Paithani of the west and many more to name.

The art of saree weaving has mainly been a prerogative of the countryside. It has been observed that the benefit which ought to be rendered to the weavers has not been justified. Hence, there has been a quest to protect the saree by establishing weaver’s societies, and most importantly by granting it a Geographical Indicator (GI) status. Mysore Silk ,Kancheepuram Silk, Madurai Sungudi, Chanderi Fabric, Srikalahasthi Kalamkari, Salem Silk known as Salem Venpattu to name a few. The grant of GI status has resulted in awareness amongst the customers regarding the quality and has given a legal cover to the product.

The saree is an archetype of Indian culture, symbolising a woman’s beauty, honour and sensuality. It has been a source of inspiration for poets and cinema. The argument stays strong and in favour of the saree when compared with the western outfit. The combination of fabrics and the play of colours symbolises the saree. Be it a home maker, a professional it’s the six yards which establishes a strong link amongst the women across the all walks of life.