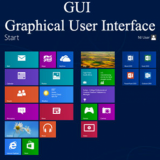 Interaction with Graphical User Interface is a part of our everyday life through phones, computers, gaming devices, and other electronic devices. GUIs are simple icons, screen layout, and visual signals that we utilize to control these devices.

GUI design is an emerging field in the technology industry, more so in the world of patents. In fact, the fastest growing segment of design patent filings is in the GUI space. For companies that sell goods and services through their website over the internet, or mobile applications; design patents for Graphical User Interface (GUI’s) would be beneficial.

While GUI designs may also be protectable under Copyright and Trademark law, but Design patents offer distinct advantages over other forms of IP protection like;

GUI is a booming technology and as of 2016 GUI Patents had made up to nearly 6% of all U.S. design patents and it has been rapidly accelerating. To put this into historical context,

Some of the famous GUI Design Patents include

The number of Graphical User Interface Design patents issued by the USPTO has more than doubled over the past two years. However, the top Design Patent application filers for GUI are not surprising; they include Microsoft, Samsung, Apple, Google, Sony and LG Electronics.

As companies face increased challenges in prosecuting software applications, there has been a shift towards IP protection of Graphical User Interface as design patents. Courts have also seen increasing Design Patent infringement cases with regards to Graphical User Interface. One among the most famous infringement cases is Apple Vs Samsung. The case revolved around the Patents of Apple; among those were- 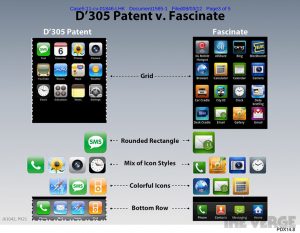 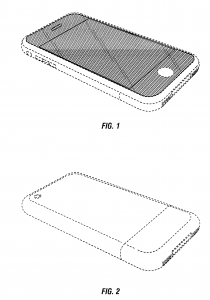 Samsung was found to have infringed several Design patents of Apple including the above mentioned.

It started in 2010 when Apple warned Samsung for infringing on the former’s patents. Apple Inc. did not immediately sue as Samsung was a trusted partner- Samsung supplied the semiconductors and OLED screens for the iPhone.

Apple had already sued HTC, wherein both settled with a cross-licensing patent deal in 2012.

Meanwhile, in October 2010, since Samsung had infringed on design patents for iPhone and iPad, Apple had suggested Samsung to pay $30 per phone and $40 per tablet. Samsung had ultimately declined as Apple’s suggestion was too high.

However, Apple sued Samsung for copying the iPhone Design. Over the following years, Apple attempted to ban Samsung devices in several countries, failed with the settlement talks. Also, in the UK, Apple had to even post a public apology that stated Samsung did not copy its designs.

However, in 2012, a trial court verdict had announced its opinion wherein the jury sided with Apple, awarding it $1billion for damages. But, in 2013, the jury that presided over the first case found that the damages applied on Samsung were calculated incorrectly- $450million of the $1billion was invalidated and a retrial was initiated. As a result of the retrial, Apple had earned an additional $290 million in damages, bringing Samsung to pay a total of $929 million.

Samsung immediately appealed the decision and in 2015, Samsung agreed to pay $548million to Apple, out of which, $399million was in dispute. Hence, $149million was the amount which Samsung would have to pay. The payable amount declared was based on total profits made by Samsung; hence, Samsung is, now, arguing that $399million is immoderate.

With GUI Design Patents trending in recent years and, also, companies facing increasing design patent litigations, countries and regions whose IT industries are relatively advanced, such as the United States, the European Union, Japan and South Korea, have all set up GUI design protection systems successively either through separate legislations, or by re-elaborating the original patent laws.

In United States, the USPTO admitted that an icon embedded in computer screen display was patentable as an inseparable part of the computer hardware as long as it was accurately described. Therefore, it could be protected as design patent.

In Japan, GUI can be protected as Design Application if it satisfies the following:

Japan is rather strict on protecting Graphical User Interface and not all GUIs fall under the protection scope of the Design Law.

In China, the GUI images must be presented as a part of the product. The designs are eligible for protection only when they are with the carrier object like computer or mobile phone with which they are displayed.

In South Korea, the GUI protection scope is much wider than compared to other countries. Design patents for screen layouts and icons are generally permitted in South Korea.

Amazon filed a Design application (240305) in India entitled “Graphic user interface for providing supplemental information of a digital work to a display screen” under class 14-02; but the Indian Patent Office objected that the proposed design was not a design under section 2(a) and 2(d) of Designs Act 2000.

According to Section 2(a) and 2(d), an “article” and a “design” are defined respectively- “article” means any article of manufacture and any substance, artificial, or partly artificial and partly natural; and includes any part of an article capable of being made and sold separately; Section 2(d) of the Act provides at least the following conditions, amongst other things, which should be satisfied for the design to be registrable: a) Design includes only the features of shape, configuration, pattern, ornament or composition of lines or colors; and b) Design has to be applied to an article.

In response to these objections, Amazon had submitted that the Graphical User Interface is applied onto the screen display of the computing device; wherein the article onto which the design is being applied is a display screen. Further, the controller refused the application on the following basis:

Do check our other blog posts – https://prometheusip.com/patents/patent-regime-in-india-a-contemporary-insight/