The stent device made of stainless steel, self-expanding metal alloys, or other suitable material has a plurality of  Abbott cylindrical rings connected together with straight and/or undulating links. The cylindrical rings have a plurality of peaks of varying heights and a plurality of valleys of varying depths. The peaks and valleys are formed from curved or straight struts of various lengths and radial thickness. The peaks and valleys include open W (butterfly) and/or a Y-pattern of struts. Each ring has at least one butterfly pattern which is connected to a long arm of the link. 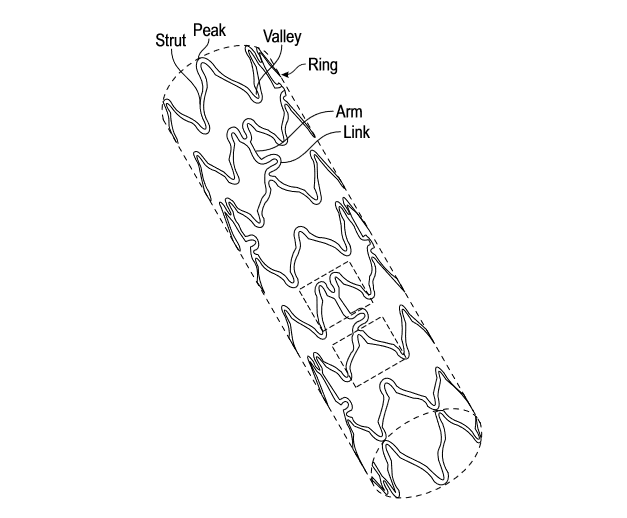 The butterfly pattern is advantageous during stent crimping especially for drug-coated stents (i.e. the drug coating does not get damaged during crimping), reduces strain on the device during expansion, and increases the flexibility of the device.

The presence of undulating links in the stent increases the longitudinal flexibility, minimizes twisting, and strains. As can be seen from the above figure, the undulating links have a straight portion as well as a curved portion. The desired longitudinal flexibility can be achieved by modifying the dimensions of the straight and curved portions of the link. The straight links, if present, can provide stability and rigidity, especially at the stent ends.

The number of peaks and valleys and the length of the struts can be adjusted to achieve the desired expansion diameter depending on whether the stent would be deployed in the peripheral or the coronary arteries.

The rate of expansion of different portions of the device would vary because of the differences in the dimensions of the struts of peaks and valleys. To overcome such variations, in some embodiments, the radii of curvature of the peaks and valleys are adjusted to achieve a uniform expansion. The peaks with shorter struts have greater radii of curvature than the peaks with longer struts to facilitate uniform stent expansion.

In some embodiments, the adjacent rings may have repetitive patterns of peaks and valleys in a rotational configuration. The following figure shows a three-ring longitudinal design where butterfly patterns are longitudinally aligned every third cylindrical ring. 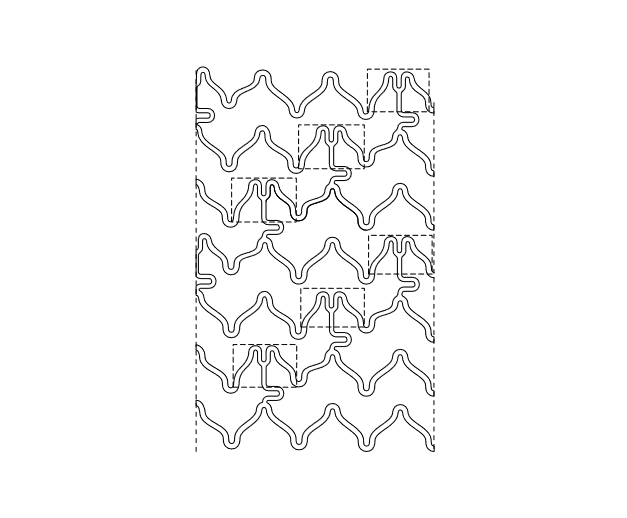 In some embodiments, the configuration of the rings at the proximal and distal ends is a mirror image or rotational mirror image of each other making the stent devices non-directional i.e. they can be mounted on a stent delivery device in any orientation. In such stents, some of the butterfly patterns are in longitudinally opposite orientation with respect to each other either within the same ring or in different rings.

Do check our recent blog at – https://prometheusip.com/patents/miles-to-go-after-patent-grant/