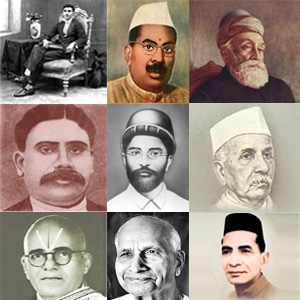 India had been maintaining a long tradition of entrepreneurship with great entrepreneurs emerging and being successful over more than 100 years who had made waves across the world having started with nothing to making an empire. They have provided motivation and direction for others to achieve goals. Their goals and achievements have demonstrated qualities to be a great teacher and the best leader that inspire and motivate us.

I would like to mention few of the Entrepreneurs who have started the business during the rule of British and had been successful when the Indian economy was not favorable for business.

Starting a business is an achievement for an individual but facing the hardships and maintaining the business is the biggest challenge. These entrepreneurs too had been through several hardships.

One among them was, Ghanshyam Das Birla, who moved to Calcutta for textile business establishment, to his annoyance the British merchants tried their best to shut down Birla’s business. Besides, he had to overcome the biased policies of British government too. Furthermore, when Ardeshir Godrej started manufacturing medical equipment in his early days, though it had a world-class quality, was eventually rejected for the “Made in India” label but this did not stop Ardeshir from doing business and growing to the now called famous, GODREJ.

To our surprise, Ratan Tata, who had developed the Tata’s first hatch-back car (Indica), had been to the American Ford company, asking them to take over it. Though the American Ford accepted, prior they disgraced Ratan Tata for developing it. Later, Ford, which owned Jaguar & Land Rover, did not know how to increase the sales of these two had to sell them to a company which was none other than the very own TATA. Soon Tata’s took over the Jaguar & Land Rover and eventually there was an increase in the sales by 8%.

According to William T. “Bill” Gross, an American Businessman and an investor in top American companies, the most important to consider among the factors is the Timing. One has to be clever enough to estimate the right time for the launch of the product. Justifying the importance of the factor, Airbnb, a well-known company, can be taken as an example. The company was passed on by many investors as it was assumed that renting a space in the house to a stranger was not a good idea. But, one of the reasons for its success is the timing of its launch; it was started right during the time of recession when people wanted extra money.

Another example to support the Timing factor is the YouTube, which was launched at the perfect timing when the broadband penetration into America crossed 50%. Regardless of YouTube not having a proper business model but being a great idea for business succeeded majorly because of the unbelievable timing of the launch.

Though, the basic foundation stone for a business is the Idea generation, the next important factor after Timing is the Execution of the idea. Spending endless hours does not bring the impact to the idea, unless it is executed well. It forms the base for the change to occur. The basic standard for execution is that the Organization must face reality and should have a strong culture for executing the plans. Apart from these, the other factors include Planning of the business model and Funding, which form the backbone of a business.

The difference between a startup and a highly successful business is briefly a few years, vision, timing, loads of hard work, and yes, a pinch of luck. Majority of successful businesses, now, were at one time a startup. Be it the famous Starbucks or Walmart to our very own Ola cabs or OYO rooms, they were once a mom and pop joints working hard to reach success. Even Facebook and Google had incepted as a startup.

For an entrepreneur, running a successful and profitable company is a remarkable experience that takes time, dedication, hard work, and sacrifice. One of the major struggles is that many entrepreneurs are so determined about gaining new customers that they fail to recognize the need to retain their old customers. A true entrepreneur doesn’t get immobilized by the negative forces. It is usual for any startup to face these problems but what actually differentiates the successful ones is how effectively they can face the challenges. He who takes the responsibility of the company and learns from the challenges is a Successful Entrepreneur.

Inspiration, considerably, comes in various forms. Sometimes we have abundance of creativity and other days our life stays still. However the situation, the only thing that can make us move forward in our life is to have motivational force. A lack of motivation impedes our ability to stay ahead in life.