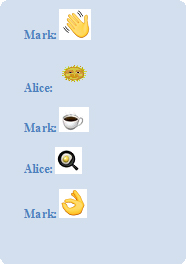 The pictorial conversation shown, does not need any explanation. Well, for your convenience it goes like this:

In the present generation, the language of

has become an easy and entertaining way to communicate with anyone. This fun to use

by Shigetaka Kurita, a former employee of

company, NTT DoCoMo. He was working for the first mobile internet platform called “i-mode”. The goal of his project team was to provide internet service on

had small LCD screen that could fit in only

letters. With this limited space it was hard to send enough information.

With the inspiration from the

weather forecasts, which always included pictures or symbols for describing the weather condition and  in

when tired or a

when someone gets an idea.

Kurita started to think that having a picture would be better that having long text and took the ability to express ideas in a single character. Hence, he recommended adding

in i-mode. Soon his proposal was accepted. Though not a designer himself, Kurita set to work, drafting the first

or so emojis himself in just

were adept to using pictures/ symbols to express feelings, the

were an immediate success in

years to spread across overseas, it is now available in every

as a separate keyboard.

In order to know the expression of people clearly, Kurita went into

and watched their expressions. He tried to understand the expressions clearly to create the

. Furthermore, he realized one common thing that most of the emotions are universal. So, one

According to a survey,

year olds prefer to express their feelings through

of people were surveyed to use

in half of their text messages.

is increasing rapidly. Fooji, a

to be ordered. Even Dominos has launched #OrderWithATweet wherein customers can order by using a

. Even celebrities are getting into the act of using Emojis while tweeting their updates. In the present world where

in the subject line in order to boost up the engagement.

have changed the way we express ourselves through text. Not only people but companies too are adapting this new way of communicating. Now, there is one common

that has arisen- why do people love these  when they have an option of text messages? The answer is simple- it’s harder to express through text. There are no facial expressions or gestures in text messages, and also it’s the easier way to communicate. For example, if someone is angry, would it be better to say “am very angry” or “

would convey the feeling better.

are to be protected from copying. Here, a much difficult

Act. The reason behind Typeface being not copyrightable is that

is an industrial design in which the design cannot exist independently and separately as a work of art. However, this does not stop the designers in this digital age from

protection for their work. As per the

in the software used to create and display their typefaces on

.Designers can then license that software, even though the actual letters and numbers produced by the software would be unprotected under

Office has revealed that so far only one company has registered a distinguished Emoji set:

One of the amusing ways to communicate through

is by using the animated

are animated and are about

of them that are formatted in animated GIFs. They are much different from the iPhone

. These help one to express their feelings in a much better way. Apart from the

in various colors and a collection of white

is properly licensed. An organization may also wish to create its own

set based on the Unicode standard to avoid

issues. However, Organizations that choose this option should be careful not to copy

set. And also should take care to make sure not to copy the software code for an

font set without authorization; as this would be a clear

violation. They should also be careful not to use copyrighted code as the basis for creating a new

As people become more habitual to the usage of

for better and improved

future appears to be a bright one as people continue to use them for better expressing their emotions through messages in an enhanced way.