The patent US4344424 is dedicated to all those who try various weight-loss techniques and miserably fail. This patent titled, “Anti-eating face mask” discloses a face mask with locking means that covers the mouth and chin of an obese person to prevent that person from eating while letting him or her breathe and speak. Couldn’t help imagining the troubles if the key to the locking means is lost!!! 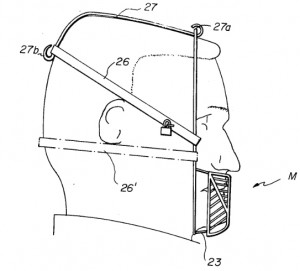 An imaginary companion but with strings attached?!?! Check out the patents US3870296 titled “Novelty and amusement device simulating an animal leash” and US5509859 titled “Leash with sound” that disclose leashes for walking imaginary pets!!! The leash disclosed in the first patent has a preformed shape that simulates the swing and sway of an imaginary dog. The second patent discloses leashes with a micro speaker that can mimic growls and meows as well!! 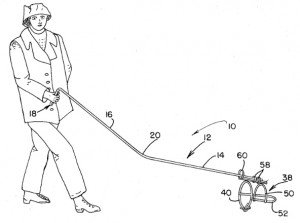 The patent US6293874 titled, “User-operated amusement apparatus for kicking the user’s buttocks” takes amusement to the next level. I am short of words to describe this invention and the figure and the title are self-explanatory. Any takers??!! 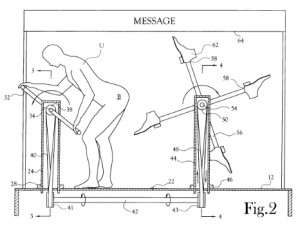 Believe it or not!!! This invention has claimed a simple synthetic stick as an animal toy and the USPTO had been technically savvy enough to grant a patent for this invention. Check the patent numbered US6360693 and titled “Animal toy”. 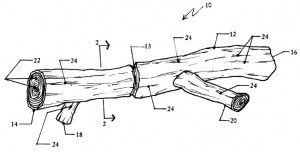 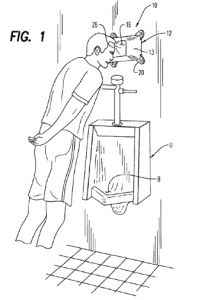 The patent GB2060081 titled “Animal powered drive means” discloses a vehicle powered by a horse running on a conveyor belt in the middle of the vehicle. The conveyor belt is connected to the wheels of the vehicle through a gear box. Luckily kick-proof means are provided in the vehicle. Otherwise a good kick from the horse might land the passenger straight to the point of destination. 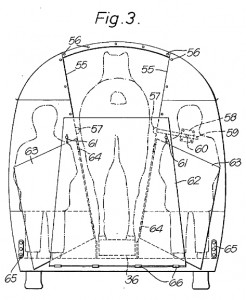 This patent is for extremist animal lovers!!! The patent titled “Spider ladder provided with means for attachment to an item of sanitary ware” and numbered GB2272154 discloses a ladder for a trapped spider to climb out of a bathtub.

I read the patent abstract…reread it….and reread it. The patent DE3416146 titled, “Device for controlling a common cold” discloses nasal clips to shut off the nostrils to control common cold. It claims that the increase in temperature obtained by shutting off the nostrils kills the bacteria. Indeed a great cure for not just common cold but for all illnesses!!! 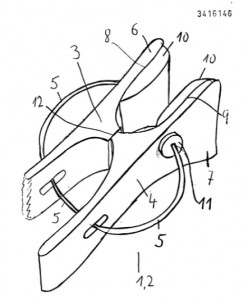 Having zany ideas like the patented ideas that are given above?!?! Come to Prometheus to get them patented. One can never say which idea will be commercially successful.