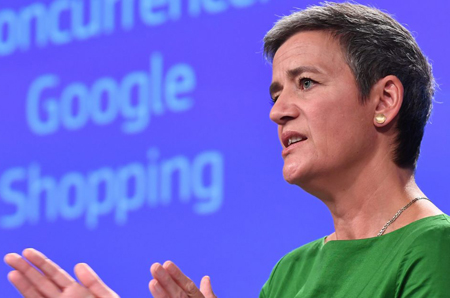 The European Commission’s antitrust chief, MARGRETHE VESTAGER, is one of the continent’s most powerful women who regulates commercial activity across Europe. Margrethe Vestager believes in free speech, free assembly, free trade- and choices free from undue influence. She is known for both- Niceness and toughness. The powerful men running the world’s biggest technology companies have discovered how hard it is to sway Vestager.

June 2017 was a big moment for Vestager, a clash between the EU and the US’s tech giants, which has been going on for more than a decade. Finally, Google has been fined 2.4 billion Euros for breaching EU antitrust rules. It is the largest antitrust penalty that has ever been leveled at a single company and went to an extent of putting the tech giant on notice for using its near-monopoly on a search to promote its own online shopping service in Europe.

In 2013, US antitrust prosecutors tried to stop Google from engaging the exact same practice in America, but Google won over them in the court and the prosecutors eventually had to give up; or maybe they dint have Margrethe Vestager, the EU’s fierce intractable commissioner.

What is that Google has actually done? 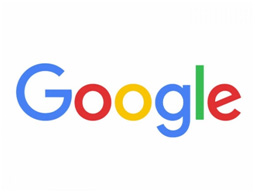 Google, the tech company that has come up with many innovative products and services has made a difference in our lives; but Google’s strategy for comparison shopping service wasn’t just about attracting customers or just about making its products better than those of its rivals. Google has misused its market dominance as a search engine by promoting its own shopping comparison service in its search results and diverting its competitors. It has denied other companies the chance to compete on the merits and innovate; and most importantly it has denied European consumers the benefits of competition, genuine choice, and innovation.

So, what happened in this case?

Google’s flagship product is the Google Search Engine. Every year Google makes almost 80 billion US dollars worldwide from Adverts such as those it shows in response to search queries; so the more the consumers see and click on those adverts, the more revenue Google generates.

In 2004, Google entered a separate market for comparison shopping, the products it started with is called FRUGAL. Essentially Frugal allowed its consumers to compare products and prices from all different types of retailers. Over the years, Google renamed its comparison shopping service twice; Google Product Search in 2008 and Google Shopping in 2013. Frugal was not the first in the marketplace, a number of other players were competing in the same space and Frugal on other hand did not perform well because in contrast Google’s search engine worked very well and it was a significant source of traffic for comparison shopping services so, in 2008, Google made a fundamental change to its strategy.

Google started to give its own product a significantly better treatment than its rivals. In search engines, Google systematically gave prominent placements only to its own products. It also demoted rival companies and rival comparison shopping services giving them a low ranking search results. Practically, it means that when a person is looking for a product, he types it in Google Search Engine and one can see the results with pictures of the product and also various deals from different retailers based on the relevant results considered by the Google Search Algorithm.

The evidence showing that Google has demoted its rival companies is that the most highly ranked rivals appear only on page 04 which means that Google shopping is much more visible and others are less visible, as a result of which the competitors are less likely to be clicked on. 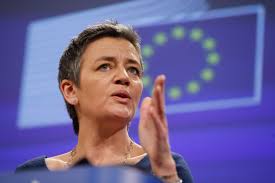 Market Dominance is not a problem in EU antitrust rule, however, if the market is already dominated by one company, it needs extra resilience to ensure competition on the merits. Well, in simple words, any company cannot exploit other competitors in any market and google has exactly done that.

The committee has taken the decision based on the conclusions; the first conclusion is that Google is dominant in general internet search in all 31 countries of European economic areas with a Market share of 90%. Second, is that Google has exploited its market dominance giving illegal advantages to its products. Hence, it was concluded that Google needs to change the way it operates and has to face the penalty consequences. 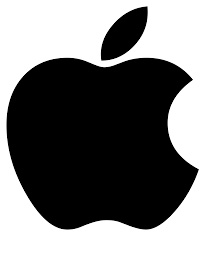 Margrethe Vestager’s job as chief sleuth needs her to protect the union’s vision of a fair market, and she’s set about it with zeal. Large American multinationals aren’t used to being hindered overseas, and Vestager’s consistent preparedness to face off against them has provoked a startled annoyance. Another among them is APPLE, Inc., a multinational technology company.

Last August, Vestager announced about the illegal tax benefits granted in Ireland to Apple Company. Ireland had illegally reduced Apple’s tax burden for over 2 decades in breach of EU state rules. And now, Apple has to repay the benefits worth up to a 13billion Euros plus interest. This decision sends a clear message that the member countries cannot give unfair tax benefits to selected companies.

One more company that has been against the European rule book is a very famous social networking service firm, FACEBOOK.  The investigation was about whether Facebook lied to EU merger

officials evaluating whether it’s $22 billion takeovers of WhatsApp would reduce competition. Officials wanted to assess the suggestions of Facebook merging WhatsApp’s data with its own storage.

Facebook had denied stating that it would be impossible for them to do that as they did not have the technology to link users’ accounts from one to the other. But later in August, Whatsapp revised its privacy terms and declared that they would share certain data with Facebook for better friend suggestions.

Hence, the European Commission fined Facebook with 110million Euros after concluding the social network misled the officials who were reviewing its 22billion USD acquisition of Whatsapp.

Vestager is known for her punchy cleverness. She is a hardliner; she is tough at what she talks…

For her it’s not just about U.S. companies specifically; it’s not their flag that matters. What actually matters is; if anyone wants to do business in Europe, one has to play by the European Rule Book.