Polyacrylamide Gel Electrophoresis (PAGE) is widely used in Life Sciences research for separation of biomolecules such as DNA, RNA and proteins for further characterization. Under denaturing conditions, where detergents like SDS are employed, the separation is based on size. Under non-denaturing conditions, the separation of these macromolecules is based on size as well as charge. Acrylamide monomers in liquid phase polymerize into solid phase in the presence of cross linkers to form a porous gel matrix through which the macromolecules are resolved by application of an electric field. The gel is cast within a cavity formed by two adjoining flat gel cassettes (plates) sealed at the lower and side edges with spacers.

Bio-Rad Labs that serves the life sciences research and clinical diagnostic needs of a global clientele has acquired a US patent 9,664,646 titled, “Polyacrylamide electrophoresis gels with protection against oxygen exposure” on May 30, 2017 for PAGE systems with means for protecting the gels from oxygen exposure. Plastic gel cassettes are porous to atmospheric oxygen that inhibits efficient polymerization of acrylamide monomers resulting in substandard polyacrylamide gels with variable porosity and density that are not suitable for the separation of macromolecules. The patent discloses PAGE systems comprising polyacrylamide gels and plastic gel cassettes, wherein the cassettes either have oxygen barrier layers or are embedded with oxygen scavenger molecules.

The oxygen barrier layer can inhibit only the atmospheric oxygen or can inhibit oxygen and other atmospheric gases as well. The barrier material is inert in nature that does not react with the PAGE system, the biomolecules or the buffer solutions during electrophoresis. A few examples of oxygen barrier materials used in the system are polyvinylidene chloride, low-density polyethylene, acrylonitrile methyl acetate copolymers, ethylene vinyl alcohol, metallized polyethylene terephthalate, melamine, silica, and alumina. The barrier material can also be a composite material such as the commercially available Bicor film (polypropylene core coated with acrylic on one side and polyvinylidene chloride on other side). The barrier layer has an oxygen permeability of about 5×10-10 [cm3 cm] / [cm2 s (cm Hg)] at 250C and 100% RH. 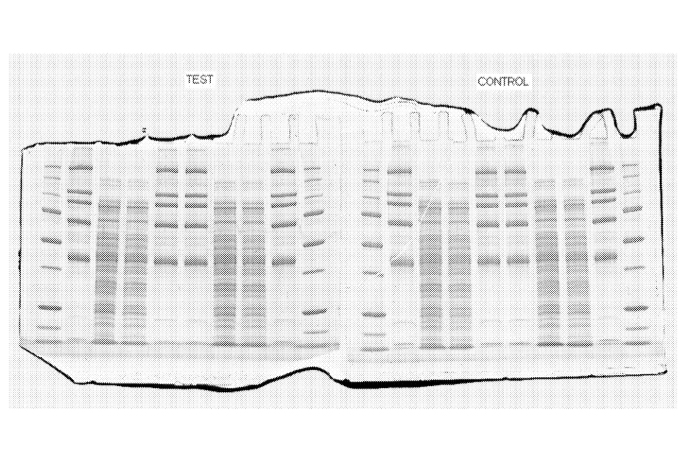 The above figure shows a comparison of two polyacrylamide gels through which complex protein mixtures are resolved. The test gel was cast in a cassette layered with a Bicor film by in-mold decoration method. The control gel was cast in a cassette coated with SARAN latex. As can be seen from the figure, Bicor is as effective as SARAN in inhibiting oxygen access to the gel.