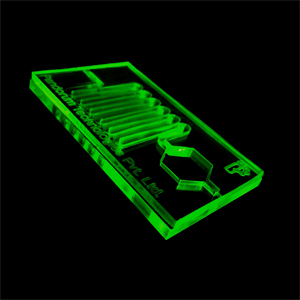 Microfluidics is an interdisciplinary technology that integrates diverse fields such as Engineering, Physics, Chemistry and Life sciences. It is the science of flow of fluids in micro or nano liter range through micro-scale channels and the technology of fabrication of devices having such micro-scale channels. Fluids flowing through micro-channels exhibit laminar flow as compared with fluids that mix convectively when passing through macro channels. This behavior and other characteristics of fluids flowing through micro-channels are exploited in microfluidics. The channels are fabricated out of a suitable material such as glass, silicon, paper, poly (dimethyl siloxane) – PDMS or polycarbonate with provisions for sample input and output. The flow of the sample is controlled and manipulated passively by capillary action or actively by flow control components such as pumps, valves, mixers etc.

Microfluidics is a revolutionary technology with seemingly limitless possibilities and many significant areas of applications such as “lab-on-a-chip” still have a long way to go before being widely used. Its areas of applications span a wide range of fields such as biomedical applications, cell culture studies, protein crystallization studies, nucleic acid analysis, drug screening, chemical synthesis, spectroscopic analysis, single cell/single molecule analysis and thermal management.

Why Microfluidics has the edge:

A recent US patent 9770,717 granted to IBM Corp. discloses microfluidic chips with bead integration systems and related methods. It addresses the problem of localization of receptors such as antibodies that detects analytes in a sample. The current techniques of receptor localization have the disadvantages of being costlier (eg: lithography), aggregation and uneven distribution of receptors (eg: spotting) or lack of resolution and uneven receptor density (receptors dispensed on porous media such as paper). The IBM patent discussed herein eases the localization and integrates the receptor beads in a specific area within the microfluidic device by incorporating novel structural elements within the device. 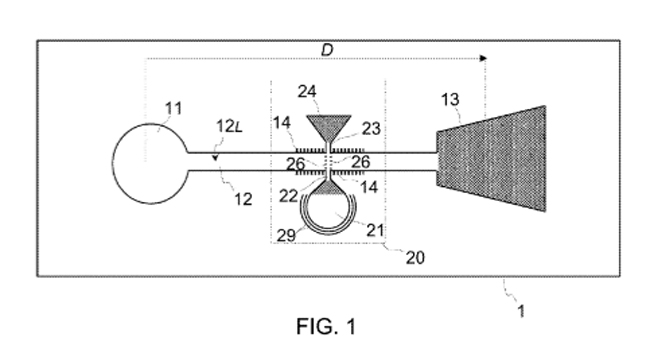 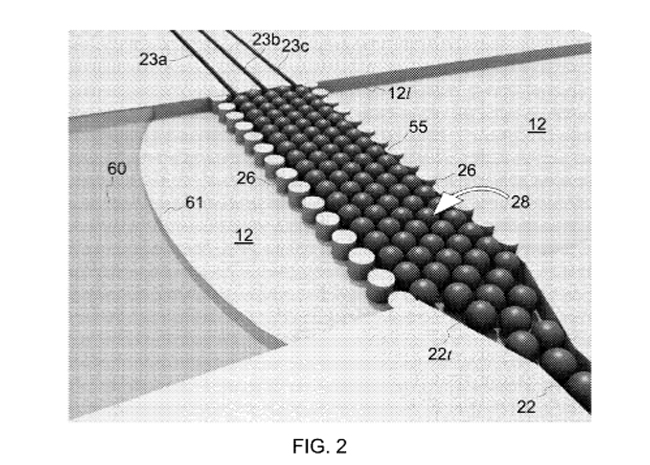 Some embodiments of the devices as seen in Fig. 3 have multiple bead integration systems 20 in a consecutive arrangement that allows multiplexing for detecting multiple analytes in a single assay.

The patent also discloses methods for integrating receptor beads in the microfluidic chip wherein a bead suspension liquid with receptor beads is loaded onto the bead suspension liquid loading area 21 of the chip. As the liquid flows past the intersection 28 by means of the force exerted by the auxiliary capillary pump 24, the beads 55 get trapped at the intersection 28 since they cannot pass through the narrow gaps of the pillar-like protrusions 26 or the narrow openings of the second auxiliary channels 23a-c. The device may further be sealed partly by a lid or a film to secure the beads at the intersection. The beads may be of a single layer and the depth of the channel at the intersection in such devices will be less than twice the diameter of the beads.

The patent further discloses methods for using such devices wherein a user loads a sample containing an analyte onto a sample loading area 11. The sample advances through the main channel 12 to reach the intersection 28 where the analyte present in the sample reacts with the receptor beads 55 to produce a detectable signal. The liquid flows through the channel in the direction D (Fig. 1) by means of the force exerted by the capillary pump 13.

Other aspects and embodiments of the invention can be referenced from the patent.

The main image “Microfluidic chip used to mature micro-tissues” by Steppenwolf24 (Own work) is licensed under CC BY-SA 4.0.